This introductory article will not present a particular topic, but rather explain what motivates its writing: Science.

It has long been a topic that induces groans of boredom from many a student. But while some cringe at the excitement deprived thought of having to calculate the velocity of a ball as it rolls down a hill elevated at an angle of “who cares”, I would politely slip in the alternative perspective that results derived from the very same field can tell us some powerful truths about nature. The explosions of chemistry, the majesty of the blue sky, natural selection’s subtle manipulation of biological traits, and the space bending black hole (which itself breaks physics under extreme conditions); ladies and gentlemen, wouldn’t it be nice, not detestable, to have some form of an understanding of these phenomena? One aspect of science that I think makes it such a neat field is its ability to show how our world works in such a compact fashion. Now, check out these eleven equations: 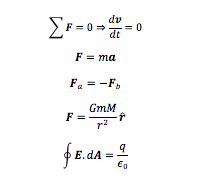 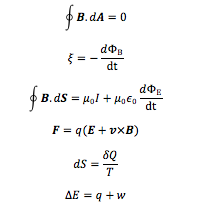 Whether you got anything physically significant from these equations is irrelevant, but what is great about ’em is that these eleven equations (plus or minus a few more with debate) form the basis of the world, as most of us know it. These eleven equations could tell us a wide range of things in an infinitely big universe (JUST F*CKING ELEVEN), such as celestial body motion ala Newton, and refrigerators to keep your goon nice and chilled. Thank you, thermodynamics. In the end, these classical laws are not strictly correct, and we must sacrifice them for Einstein’s general and special relativity and quantum mechanics. These two modern theories are particularly mind bending, putting absolute time and space, and our certainty in where we measure things into question. While I’ve talked about physics today, because that’s what inspires me, I would hope to report on other natural sciences in this segment. Basically science is cool and I like it. Word.

If you weren’t fond of my overdramatic spiel, here’s a joke:
“Hey baby can I be your integral? So I can be the space under your curve” 😉

The ICAC Showcase is that time of year when all the most talented musicians get together to show off their stuff. It aims to…