Rape jokes generally aren’t funny. This isn’t some call to being ‘proper’ or ‘politically correct’ – it’s very simply about being a decent human being to those around you.

The average person hates being ‘politically correct’. Enforced by angry feminists, boring people, hippies and (worst of all) wanky politicians, political correctness is the death of all humour and denies free speech – right? Wrong.

1 in 5 women and 1 in 20 men have experienced sexual violence or assault. This means that when you make a joke about sexual violence to a group of people, there’s a large chance that you’re making a very traumatic, serious incident in someone’s life into something funny. Someone who makes a rape joke doesn’t have a “dark sense of humour” and isn’t just “politically incorrect” – they’re actively hurting the people around them.

I firmly believe that you can be funny about any topic. Which raises the question – how do you make a joke about such a terrible event without being a douchecanoe?   Jokes that condone rape are never funny. However, jokes that satirise rape culture and ultimately condemn sexual violence can be funny. Humour can be a way to process the awful things in life, but if your sense of humour involves you picking on the victims and essentially kicking them while they’re down – that just makes you a bad person.

IS MY RAPE JOKE FUNNY? A HANDY GUIDE 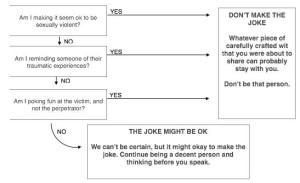 Around the World in 800 Words: Kenya

Our time as undergrads is a coming of age odyssey that roughly lasts three years. A stretch where we experience life. It’s our attempt…