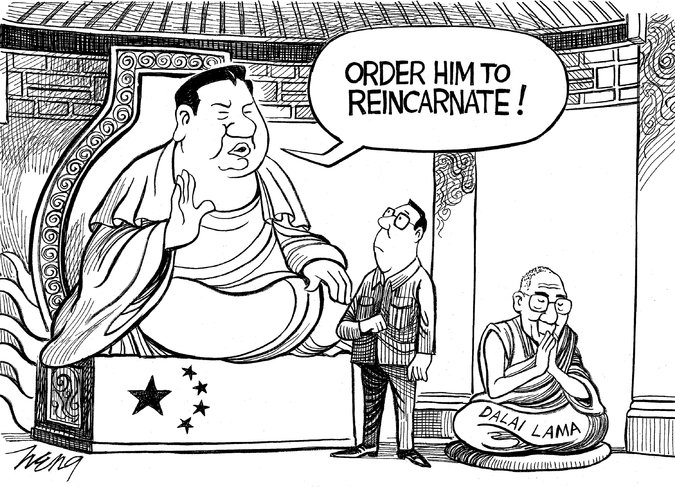 Once upon a time, before wonderful inventions like the toilet seat and red velvet cupcakes, there existed a very holy monk. So holy, in fact, that many people considered him to be the reincarnation of the Buddhist saint of compassion Avalokitesvara. So holy, in fact, that he is still amongst us today, in the grand 2015 of the 21st century. Through generations after generations of spiritual reincarnation, this holy monk has come to be revered in modern society for his pacifist ideals and wisdom. Ringing any bells yet? That’s right, folks. We’re talking about none other than the one and only, Dalai Lama.

So let’s get down to business and face some cold, hard truths, guys. The Dalai Lama we all know and love has been around for a while. His bones are probably starting to ache. Well, you might ask, what’s the big deal for someone who’s mastered the sacred art of reincarnation? Nothing. Nothing at all. Except for the fact that our 14th Dalai Lama is choosing to die, for real this time ‘round.

As undecided as he is, the Chinese Communist Party is… well, prepared to raise hell is an understatement. They’re not pleased and, better yet, they’re not going to sit around twiddling their thumbs. In fact, they’ve full-on forbidden him to, well, die.

While the thought of a fuzzy little thing buzzing around with more wisdom and knowledge than half the world is interesting, what’s more interesting is the repercussions this will have on the tentative relations between Tibet and China. Before we delve into this, a little backstory never hurt anybody.

In 1995, the Dalai Lama named a 6 year old Tibetan boy as the reincarnation of the Panchen Lama – the second-holiest monk in Buddhism. All good, right? All good… Until the Chinese government ‘disappeared’ him and popped out a different boy that they claimed had the same serene soul. Sound suspicious to you? It should.

Food for thought: If the Communist Party can appoint their own Panchen Lama, what’s to stop them from appointing their own Dalai Lama? His extra holiness sure isn’t going to prevent anyone from doing anything.

To avoid being used as a political puppet, it seems like the Dalai Lama has opted to go out with a BANG. Taking his popularity and the people’s love with him, the holy monk is weighing his options. If he does indeed reincarnate, theories have been tossed around about his reincarnation being in Mongolia, India, or better yet, being an insect. Like a precious little bee. Either way, a reincarnation in China is out of the question. So look out for Chinese Dalai Lamas, guys. Just like what China is renowned for, it’s probably a fake!

DEBATING   Saturday 15th August 9am-5.30pm at Whitley Come along to watch some of the Crescent’s brightest minds fire against one another in…