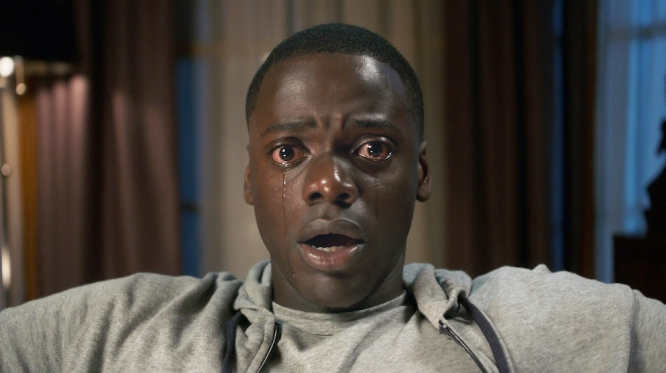 WARNING: This film contains gore and sensitive topics of racial discrimination. If you cannot handle gore, abstain from this film. If you support white supremacy, all the more you should watch this film.

Get Out is a thriller-satire that centres on the concept of racial prejudice that is portrayed in an adrenaline-rushing yet clever manner. It deals with the very real issues faced by African Americans in the USA, such as interracial relationships, interactions with white people and racialized police brutality. Get Out begins with African American protagonist, Chris, and his white girlfriend, Rose, taking a weekend trip to meet Rose’s parents in a quiet, isolated suburb.

Through the interactions between Chris and the other white characters, the façade of liberalism by white people is seen to be patronizing and awkward through the state of total oblivion they are in when Chris becomes increasingly uncomfortable with each interaction. This false liberalism turns into something much more sinister over the course of the trip (which I will not divulge, because this is where it becomes increasingly terrifying and shocking). I thoroughly enjoy the way that the movie masterfully combines satire and thriller, although this is a rare combination in film. Thrillers typically play on the tangible fears of viewers, leading them to deploy elements such as jump scares to keep them at the edge of their seats. This film instead plays into the deeply entrenched fears of racial discrimination by people of colour, especially African American men and women. Despite the fact that the film’s science behind its sinister scheme is highly unrealistic, it is a chilling representation of the white colonization and possession of the minds and bodies of black men and women that is prevalent throughout history.

The way that the film employs psychology as a form of psychological manipulation is an interesting element of the film. Chris was manipulated through hypnosis and it was disturbing that the hypnosis was done without his consent by Rose’s mother who was a therapist. Hypnosis might not be a legitimate practice, but this lack of consent to it was a subtle portrayal of white supremacy and entitlement as it was as if she could manipulate him however she wanted to because she was white.

However, after watching Get Out, certain elements of the backstory and plot left me wondering ‘why is this so? How does this work?’. Perhaps you might feel this way after watching it, as they did not provide an adequate explanation of specific elements of the plot, but you may find that those missing loopholes do not undermine the plot at all.

Overall, Get Out is a highly refreshing take on modern day racial prejudice in a white supremacist society. The release of the film could not have been any timelier, given the recent occurrences of racial discrimination in the USA. I highly recommend this film, so spare some time to watch it!

The Ghost of Jessica

She sits in the games room at all hours of the morning, sobbing. The TV is on. She’s playing MarioKart, alone. She’s dressed in…