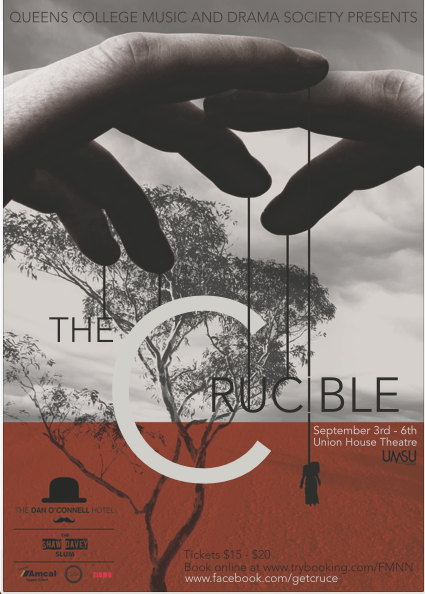 This year, Queen’s College Music and Drama Society (QCMADS) decided to have a take on Arthur Miller’s iconic play: The Crucible . Producer Fletcher Diamantis and director Brendan McDougall (our very own ICAC President) had a clear vision of what they hoped for and wanted to achieve with their interpretation of this classic from the start. For the past few weeks, it was almost impossible to escape the sea of posters, Facebook posts, trailers and other form of promotion about their upcoming play. No one could run from The Crescent’s most trending hashtag: #getcruce.

A bit of background is needed before starting this review. The Crucible  is a personal favourite of mine. It is set in the 1600s, during the Witches of Salem’s trial in Massachusetts, USA. It follows the stories of several families, torn apart by witchcraft accusations, and focuses on a couple dealing with adultery amongst other issues. The play reflects the political tension in the United States at the time it was written in 1953 and is an allegory of McCarthysm as the US government was blacklisting accused communists across the country. Miller himself was questioned in 1956 and convicted of “contempt of Congress” for refusing to identify other presents at meetings he had attended.

Having seen, read, and even produced The Crucible  back in high school, I was very excited to experience Brendan’s take on the matter. He had decided to go a whole new direction, and changed the settings and timeframe from 1600s Massachusetts to contemporary Victoria. I was slightly surprised and rather intrigued. I definitely could not wait to “get cruce”.

The set, while simple, was separated in four different areas. The foreground, representing a basic house with white walls, was itself split into three rooms: a bed room with a single bed, a dining room occupying the majority of the stage and a kitchenette with a sink. The back of stage was consisting of two barbwire walls with a gap in the centre, allowing the cast to move in and out of the stage through the back.

The first Act of the play focuses on the little Betty, unconscious after having supposedly summoned Satan and danced naked in the forest. To be honest, I was not entirely satisfied with the actor’s game in this first act. The size of the theatre made it really hard to understand what they were saying and they tended to rush through a lot of their lines, making it hard for the audience to follow the rather complicated storyline.

The second Act was a lot better in so many ways. You could easily tell that actors were more at ease. This act focuses on the Proctor’s family, the main protagonist of the play. Both Angus Dowell and Anthea Maclean did an amazing job as John and Elizabeth Proctor respectively. The audience quickly figures out that John has been having an affair with one of the girls accused of witchcraft in the first Act, and the tension in the household between John and Elizabeth Proctor was palpable, making the audience feel uneasy. Gabrielle McLeod also offered an amazing performance as Mary Warren, a kid stuck in a web of lies. The second act ends as Elizabeth Proctor is accused of witchcraft by John’s lover and is taken to jail.

After a brief intermission, Act Three picked up exactly where the story ended in the first part of the show. The set had been rearranged to look like a courtroom, in which the trial of the different characters took place. The lighting design and monochrome costumes added a lot to the sombre atmosphere and unsettling ambiance of the third and fourth acts. Raja Nourreddine, Deputy Governor Danforth, was another highlight of the second part of the show. His numerous exchanges with the Proctors were intense and left the audience trembling in fear.

The play ends as John Proctor, after confessing to have practiced witchcraft to save his wife, refuses to produce a written confession to the judge and dramatically tears it up, condemning himself to death. Elisabeth realizes that this is, at last, his moment of redemption: “He have his goodness now. God forbid I take it from him”. The curtain falls as John is hanged to death.

Overall, The Crucible was an amazing play and met my expectations. However, a few confusing details put the audience off. The play was supposed to be set in country Victoria and the actors were drinking Carlton Draught on stage and all had thick Aussie accents, but then they would then refer to American towns like Boston or Salem. Likewise, the costumes indicated that the play was set in a modern time, but the actors would refer to hanging as death penalty, and a few other anachronisms, such as the use of a recent smartphones contradicted the use of older-looking objects and 50s-style set. The very end of the play was also rather confusing, as John Proctor is sentenced to hang, but as the curtain falls, a gunshot is heard.

Apart from these small details, The Crucible was a very enjoyable play. Jordie Heys’ incredible compositions and the great lighting design added an extra twist to the play, and even though the space on stage could have been used more efficiently, the overall feel of the production translated well the fearsome atmosphere the villagers of Salem experienced years ago during the trials. Hats off to Brendan, Fletcher and their amazing cast and crew.

The real purpose of a film review is to recommend whether or not you should see a movie. In regard to Jim Henson’s 1986…