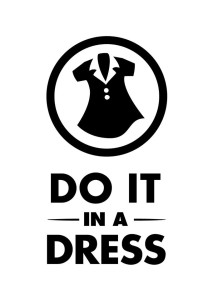 Do It In A Dress is a campaign which aims to raise money for girls education, in particular, for girls in Sierra Leone in West Africa. We all know that education is important for everyone, but currently there is still a massive discrepancy between access to education between boys and girls.

Only 15% of girls reach secondary school

Some of the main underlying reasons for this massive disparity is teenage pregnancy, which is among one of the highest rates in the world, and this contributes to high dropout rates of girls in secondary school.  Child marriage, gender-based violence and cultural/religious bias are other important contributing factors to these shocking statistics.

Last year at IH, we had a really successful Do It In A Dress Team, and this year we’re hoping to continue the tradition! Here’s what you’ll have to do:

Remember, education is empowering. Let’s use the opportunity we have been given to help change the life of a girl in Sierra Leone!

Kiss Away The Blues

I’m sure you’ve all heard of Movember, but have you heard of Liptember? Starting on the 1st of September, Liptember is a campaign where…