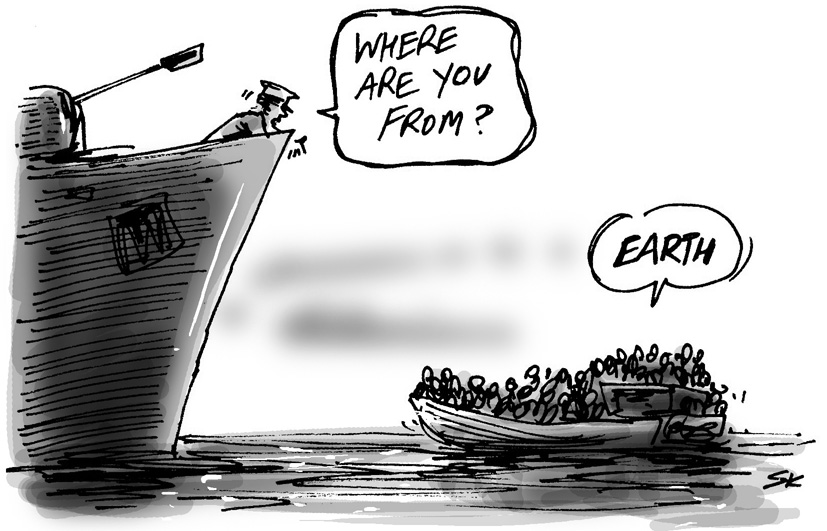 You shiver with cold. Or is it nerves? The unwelcome butterflies are in your stomach again. You would think that after all that you’ve been – surviving the guns, the bombs, the gas, the militants and the crazies – you wouldn’t be nervous any more. This should be a breeze. But you are still nervous.

And tired. The nightmares wake you up at night. They are all the same. It’s a normal day in Syria. Life is alright. You have your family, your work, you go to the market for food. Life isn’t perfect, you know the government is corrupt, and that you can’t vote, but as long as you have food for the table, and your children have a future, then you probably won’t get to upset.

But the scene changes. Subtly at first. Rumours and fear sweep through the streets like an invisible sandstorm. You feel the tension on the streets and in your body. Then the soldiers arrive. You can’t remember which side they are on. There are too many. Everyday becomes a trial – avoid the soldiers, avoid the bombs. There are dead bodies in the streets. You try not to look. When you see the dead children, somehow their faces morph into your own children. The grief ripples through, and threatens to tear your body open. They are gone. You must keep going.

The scene shifts again. It’s the boat. That horrid, cramped pile of putrid metal, filled with the stench of desperation, excrement and vomit, and decaying human dreams. It was a torrid, endless voyage, spent in a combination of illness and gut-wrenching fear. The water seemed endless around you. You wished you knew how to swim.

When you think about the nightmare, that one that never seems to end, the fear that seems to follow you, even in the daytime, when the sun is shining and there are no bombs and the ground doesn’t sway and the smell of death is gone, this is nothing. You would happily stay here, in this new country, in the edge of Europe, except there is no food here. No money. No housing. No, you can’t stay here. You’re journey isn’t yet over. That is why you must get into the truck, you tell the butterflies in your stomach. It’s necessary. There is hope in Austria. A future. The truck is cramped, but at least it’s warm. There are many people in here, mostly men, but some women and a few children. You shudder to think that their whole life has been your nightmare – they’ve never known anything but war and violence.

You haven’t been driving for long before you realise something is wrong. Everyone is lightheaded. You have a headache. Soon the baby starts wailing. Then wimpering. Then panting. Panic starts to rise as the adults realise the terrible danger. You start banging on the side of the truck, expending precious energy and air to try and make yourself heard. The others join in. The women scream and wail. The men yell in anger. Somebody tries to break down the door.

It’s no use. Slowly, one by one, you all stop as breathlessness overcomes you. It’s no use, they can’t hear. Save your energy and breath, concentrate on breathing. In one corner a woman is wailing. Somewhere in the panic, the baby stopped breathing; it’s small, malnourished body unable to deal with the panic and breathlessness. You are dimly glad it was the first to die. You’re thoughts are muddled, but you know you are going to die. And even though no-one else in the truck has the breath to say anything, you can see that they know. You know what they are thinking – how did we survive the bombs, the soldiers, the border crossings, the sleeping rough, the lack of food and the ocean, only to die in Europe, in this truck. You have no answer.

You wonder what they will say when they find the truck. Probably some politicians will say some things. Maybe they will be shocked. They might send some aeroplanes and bombs and troops to Syria, to fight. You don’t know what good that will do – aeroplanes soldiers and bombs were what started this in the first place. Life was good before they came.

You wonder whether other countries even care. You wonder why they make it so hard to leave Syria: don’t they understand that you can’t live there anymore. There is no life, no future. Those who are still living are already dead, each day lived in a haze of wondering when the bomb will come that has your name on it, that will end this suffering and fear.

You decide they don’t care. If they did, they would do something to help the innocent people. They would let them flee. Should they care? Was your life worth anything to start with? Maybe it was never worth anything.

These thoughts are too painful. Even through your dulled and dying senses, you can still feel the desire to be human again, to have hopes and dreams and a life and a family to replace the one you lost, and a home. Because that is what they took – the bombs and the soldiers and the border police and the politicians – they took your humanity. Without it you are nothing more than a sad statistic in a newspaper, another person who died. At least, you think, there is no-one left to mourn you.

It seems futile. Your breath is short and shallow, and your vision swims alarmingly. So you close your eyes, and slip into your last, dreamless sleep.

On the 27th August, Austrian police discovered a freezer truck abandoned on the side of a highway. Inside were the bodies of 71 people, thought to be Syrian refugees. It is believed they were smuggled from Hungary, and that they suffocated in the van because there was no ventilation. They had been dead for two days when they were found. The youngest was an 1-2 year old girl.

Coming Out of the Disabled Closet

I would like to start this article with a very obvious statement: not all disabilities are visible. I feel like this is a relatively…