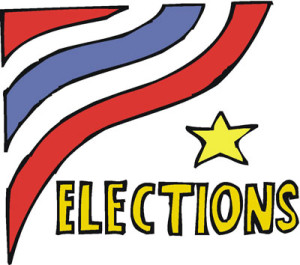 Last week there was an invasion into Melbourne University. This orchestrated and planned attack was perpetrated by non-other than the dreaded STUDENT POLITICIANS.

Their plan of attack focused on covering the most crucial of landmarks: the libraries, the Union House and South Lawn. This all-out assault has left many trapped in packs of enthusiastic student volunteers.

Have you been bombarded by pamphlets? Has a stranger come up to you to ask for your vote? Have they forced you to talk (for a considerable time) about how terrible the other (unknown) parties are, and how great theirs is?

Do NOT Look Them in the Eyes.
DO NOT MAKE EYE CONTACT.
Student volunteers (like gorillas) will take this as a challenge and attack you. Prolonged eye contact WILL make the student volunteers approach.

Be Holding Things.
They can’t give you things if you cannot physically hold them.
Best items to hold include: Books, computers, cans of pepper-spray, food, novelty giant soft toys or a watermelon.
If you have nothing to hold I suggest emergency amputation.

Look Busy.
Very busy. So Very Busy. Maybe wear a suit with a brief case. Wear a business-y expression. Think about taxes and the economy. Yes – like that. So serious. No one is going to bother you like that.  Alternatively –

Go Undercover.
Steal one of the T-Shirts that they wear as uniforms. Disguising yourself as one of them they will not attack.

This approach is risky as you may be approaches and abused by rival parties. Also one must be careful not to be discovered by the real members of the party

If the worst occurs and you are cornered by a pamphleteer here are some more tips:

Ebola, Post-Colonialism and the State

**Warning: This article contains politics** As a politics student (and, let’s be honest, a bit of an enthusiast) I have watch to development of…