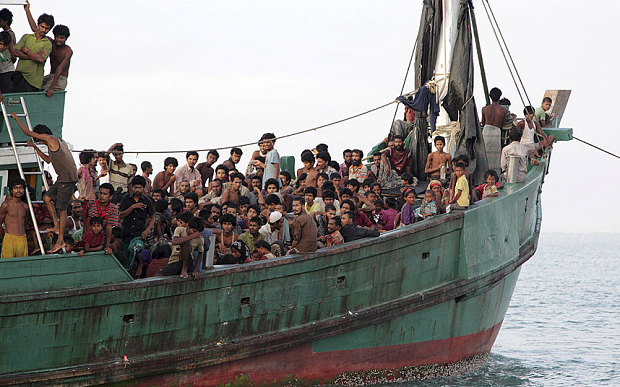 I’m going to apologise in advance – this article is definitely more of a rant than an article, but I’m really angry, so bear with me!

Rant Object No. 1: People on Boats

So, most of you should be aware that there are currently thousands of people floating around on boats in the seas off Myanmar, Thailand, Malaysia and Indonesia. (If you weren’t, before you keep reading, go and find a newspaper and read the world section on that).

As you can see, there are hundreds of people on this boat. And they’ve been on this boat for MONTHS!

The populations on the boats are a mixture of Rohingya Muslims and so-called Bangladeshi poor. The Rohingyas are from Myanmar (Burma), where they have lived since the British uprooted them from Bangladesh in the 1800s. They have no citizenship, no access to basic education or services and are subject to constant violence from both the regime and other populations in Myanmar. They used to flee across the border to Thailand (where they were in exactly the same position, but without the violence), but Thailand recently closed the border. So, now they are fleeing on boats, with nowhere to go, and nowhere to go back to. By any definition, they qualify as refugees.

The Bangladeshi on the boats have been somewhat cynically called “economic migrants”. In reality, they are the poorest of the poor, so desperate to get a job anywhere and be able to support themselves that they would risk a journey of several weeks on a boat like this. Under international law they aren’t refugees, because abject poverty is not considered a justification for refugee status (although, that says more about international law than the Bangladeshi themselves).

Why am I angry?

Where shall I start? How about the response of ALL OF THE GOVERNMENTS INVOLVED IN THIS! The Thai, Malaysian and Indonesian governments have been towing the boats back out to sea and leaving them there. Some boats were towed out (often at gunpoint) 3 or 4 times. These governments are seemingly happy for these people to die at sea! (Granted, after significant international pressure, they have started rescuing these people, so I should give them credit where credit is due).

Then there is the Australian government. Where do you think the idea to tow boats back out to sea came from? Yep, that would be us. And do you think the Australian government has been standing up for the people stuck at sea? Well, we can’t really criticise other governments for adopting our own policies. But we could offer help and aid to feed, clothe and resettle these people. Regardless of whether they are refugees or not. Because most of our country’s leaders claim to be Christians, and Jesus commands his followers to help the poor and needy. But above all, these people are PEOPLE, who are desperate and in need. By ignoring them, we are complicit in their poverty and in many cases their death.

Why is this important?

We can’t ignore human suffering. We first started hearing the stories of these refugees when Indonesian fisherman from Aceh saw the boats and the suffering, took pity on the people and towed them to shore (local communities have since been providing for these people without support from the government in Java). Their stories are awful. They ran out of food and water. There were violent clashes between the Rohingyas and the Bangladeshis over food; almost 200 people were killed. Children were thrown overboard. There is no justification for our policy. Our inaction is directly leading to people dying.

So, the Islamic State (or whatever we are now calling them) took the ancient city of Palmyra in Syria this week (as well as Ramadi in Iraq – but that didn’t get nearly as much coverage). The Western World is up in arms! We must protect Palmyra! There are some amazing, world heritage listed ruins there! We must do something!

Well, I’m sorry, but that is ridiculous. The ruins are pretty, and they are interesting, but they are also ruins. If they get destroyed life will go on.

On the other hand, 140,000 people live in Palmyra (or Tadmur, as the modern city located 500m from the ruins). Well, 140,000 people lived in Palmyra before Islamic State turned up. Many of them have fled. Many of them have been killed. Their lives, homes, infrastructure and families have been destroyed. Their kids won’t be able to attend school. Women and girls are being forcibly married to IS fighters, raped and then divorced. We can’t imagine the pain and suffering.

To give you some idea of the destruction of war, look at the following link to see what the town of Kobane looked like after it was captured by IS, and then recaptured by the Kurds:

And yet all we seem to care about is a bunch of very pretty old structures. As a society, I think we need to take a good look at ourselves.

The AFL Grand Final: The Ins and Outs of September

The AFL Grand Final; the preeminent event of Australian sports, the pièce de résistance of the sporting calendar, and probably the best reason ever…