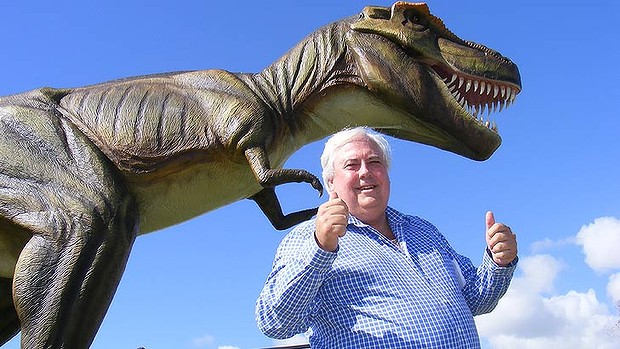 Among the parliamentarians and politicians of this great nation, few have appeared that have stood out in such a spectacular way that they warranted an explanation in Globe – Until now.

And so, we would like to introduce to you all the enigma that is Clive Palmer .

A man with boundless ambition. Aiming to rebuild the second Titanic (at an estimated price of $500 million)

A man with a vision, to bring the past into the future (and bringing to life a beloved 90s movie) by constructing a dinosaur park ala Jurassic Park by building. The Queensland based ‘Palmer Coolum Resort: Dinosaur Park” or ‘“Palmersaurus” is littered with 100 robot roaming prehistoric pals

Recently, however, this larger than life politician, has been faced with a great loss . Palmer recently had to mourn the death of one of his robotic dinosaurs, Jeff. Jeff was a much loved 10-metre model Tyrannosaurus rex positioned on Palmer’s luxurious golf course (Jeff used to roar at golfers, much to their annoyance!) . Jeff burned up in flames, although whether the fire was due to arson or electronic failing is still unknown.

On the subject of the loss, Clive Palmer had this to say: “Jeff’s brother is waiting in the dinosaur park to be liberated to take his place,”the Federal MP said.

“Question is whether we bring him out or whether we leave him where he is – he’s very happy with the other dinosaurs. “

Certainly the next birth we have of a dinosaur, we will name after Jeff.”

*Note to international students: we actually elected this guy to parliament!*

Fine arts and the not-so-fine mind of a student.   The life of a fine arts student isn’t what people believe it to be….