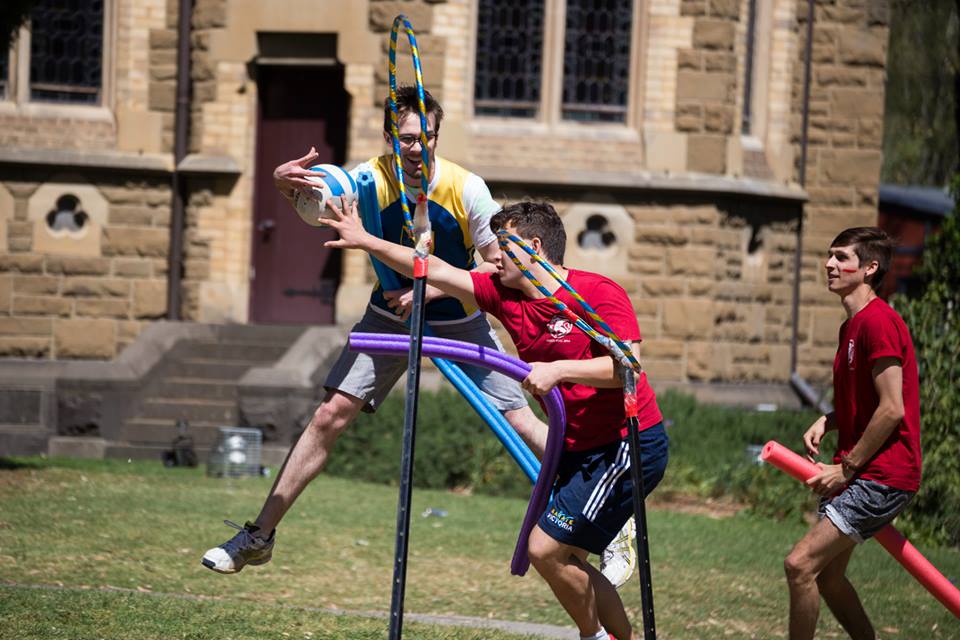 Magic was in the air this Sunday. After a tryout session that only included one head injury, our team was primed, sharpened and ready to go. We arrived at Ormond, with the scent of ripe sausage sizzle hanging in the air and academic gowns fluttering around our ankles. The team consisted of ten people who covered a variety of positions – Jon, Matt and Schmitty our beaters; Jacob and Gabe our keepers; Sarinie, Evie and Monica our chasers; and Cindy and Tom as our speedy seekers.

Muggle quidditch is a relatively recent adaptation of J. K. Rowling’s sport ‘Quidditch’ in her Harry Potter books. Invented at Middlebury College in the U.S.A., it’s evolved into a full fledged sport in American varsity leagues. However, here in Melbourne it’s still essentially Harry Potter fan service and a good excuse to have fun with other colleges.

We first played Newman, who were quite deadly. One of their players was probably the real life version of Ginny Weasley because she was that good of a Quidditch player except she wasn’t redhead. We held our own, but unfortunately didn’t triumph.

Our second match was ridiculously close. Medley, the new kids on the block were giving it their all, showing that they had what it took to (newly) be a part of ICAC. However, IH were playing splendidly and thanks to some awesome, tricky moves by Sarinie, we were leading in points. Sadly, Medley managed to capture the snitch in the last few seconds and we didn’t beat the bonus points.

No one could have prepared us for dinner. We were told ‘Hogwarts’ theme, however when we arrived, we were greeted by fire-twirlers and an elaborately-decorated dining hall. The food – amazing. The atmosphere – magical. Definitely a must-experience-before-you-leave-college moment, and another reason why you should get to know other colleges!

A closing congratulations to IH for getting involved and getting around Quidditch! The show of supporters was amazing for our morale and you all got to see some great ICACing. Intercollegiality is amazing and you get to do and see some amazing things (and people).

STRANGER THINGS GOT ME LIKING HORROR

(Note: There’s no spoilers bc I want people to watch & enjoy things in their own time)   A mini series review in the…