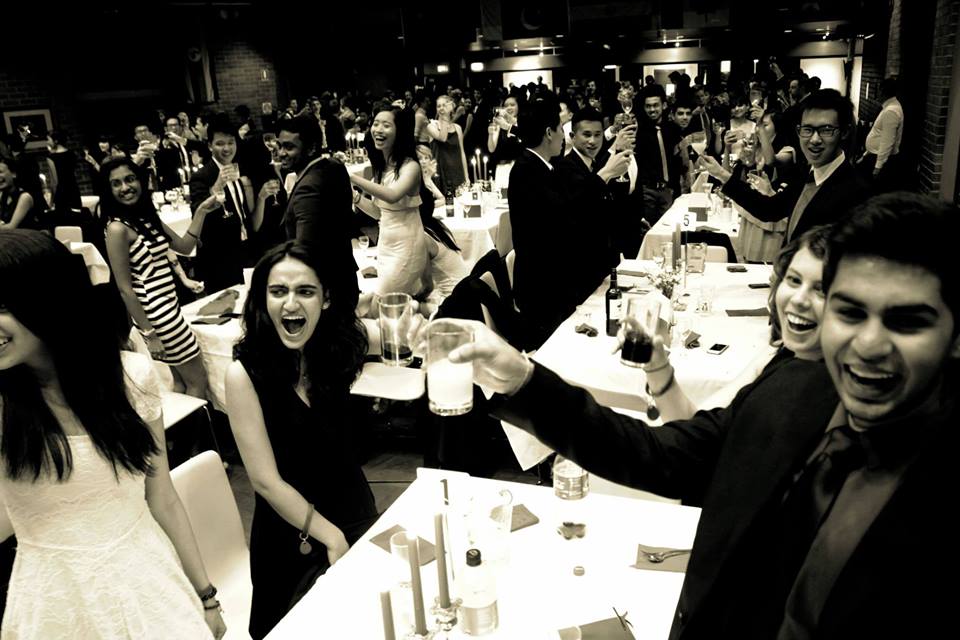 As smoke appeared on stage with ‘eye of the tiger’ song intro booming from the speakers, out came the energetic, lively, and spontaneous 18 CIA Weekers!!!

With a kick off start at Karaoke night, IH-ers got the chance to sing their hearts out, whether it be in groups, pairs or even singles. And though the fun from the weekend was thought to have ended once uni had begun…, think again! The fun never ends when you’re in Cultural Inter-Actions (CIA) Week!!!

After a first day of uni for most, CIA Weekers brought to IHouse, the Pyjama party!!! Featuring the incredible Red Frogs & fruit platters, & marshmallows with a delicious chocolate fountain, a break from uni on the 1st day of the week was needed with the classic favourites, ‘Harry Potter and the Prisoner of Azkaban’ followed by ‘The Hangover’!

What makes CIA Week so great, is raising the awareness of hard-truths worldwide, with Global Dinner! Though it had a few confronting facts, everyone was seen to have heaps of fun participating in the countries they were randomly put in.

AND THEN… THE TIME HAD BEGUN! THE ASSASSINS GAME!!! Once the kitchen doors closed, over 50 kills were made throughout the 1st night! Despite the slowly increasing tension and suspicions that rose within the community, it was inevitable that when “It’s 5 o’clock somewhere in the world”, everyone was sure to have had heaps of fun going on a tour around Melbourne, trying out different and awesome dining places!!

Then the formality begun! Though some were assassinated at Pre’s, Winter Dinner gathered everyone throughout IH on this special occasion, where formal dresses & suits were worn & wine was shared, and there it was, the celebration of the official beginning of Semester 2 with a great end to the night with IHers taking over the Billboards nightclub for the afterparty!

What is more to say, TREAD Trivia night was a success! Enthusiasm, energy, excitement, are of the many things that describe that night filled with hilarious and amusing moments! When the weekend struck, more excitement was to be had at China Bar Signature Buffet!! What a fantastic way to fill one’s stomach with such delicious and quality food, this restaurant is one of the greatest IH Yum Cha favourites in history!

Then, the GREAT CIA WEEK RIVER CRUISE PARTY BEGUN as the clock strikes 7:30PM! With over 75 large pizzas that lasted throughout the entire night, cheap prices for drinks, and having the theme, ‘Around the World’, the River Cruise Party was by far the best party had!!!

And yet, the CIA Week awesomeness hasn’t stopped there… After a successful morning of men’s intercollegiate AFL, the BBQ lunch with the postgraduates not only filled many stomachs, but also enabled further chances for people to get to know each other, whether it be fellow undergraduates or postgraduates at IH.

And with a final end to the incredible CIA Week, TREAD pancakes were made for all to enjoy in the awesome kitchen of Greycourt! CIA Week was truly a memorable, fun, and exciting week for all! Look forward to many more CIA Week’s to come, as heaps of fun is always to be had!!!

Dalai Lama VS Chinese Government: A Battle of Wills

Once upon a time, before wonderful inventions like the toilet seat and red velvet cupcakes, there existed a very holy monk. So holy, in…