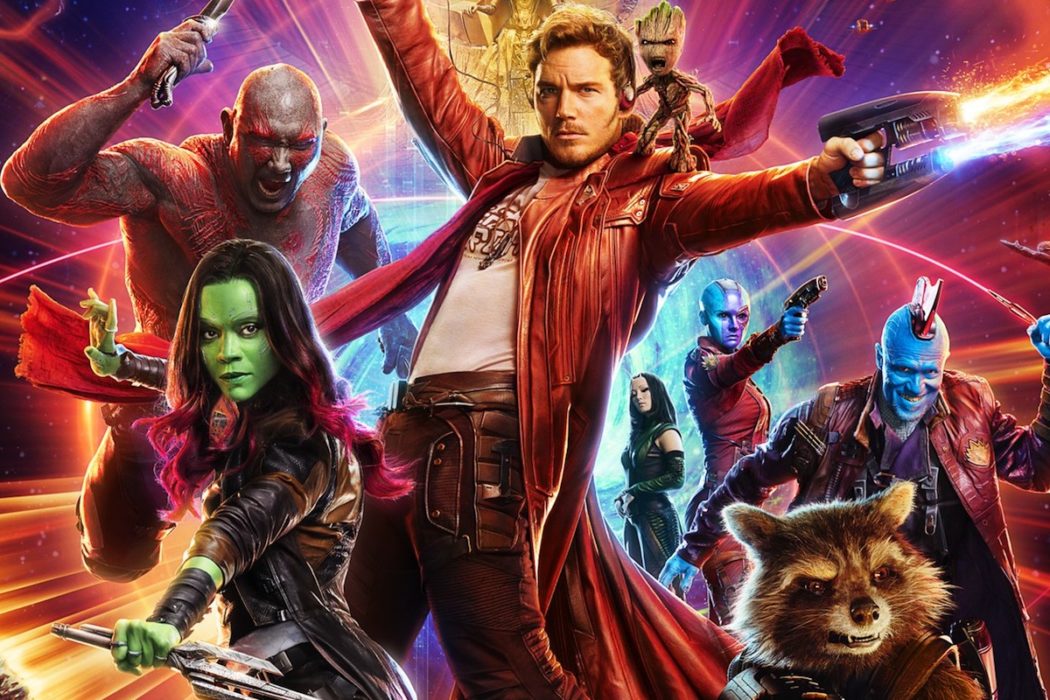 Guardians of the Galaxy Vol.2 (GOTG2 for short) is the sequel to James Gunn’s Guardians of the Galaxy (2014). Gunn, the rest of the guardians, and some other familiar faces return for this  sequel. Just to refresh your mind, the guardians include Starlord (Chris Pratt), Gamora (Zoe Saldana), Rocket (Bradley Cooper), Drax (Dave Bautista), and of course Groot (Vin Diesel). This time the plot mainly centralizes around Starlord’s mysterious parentage background as well as the complex relationships within the gang.

The first scene with the guardians involves baby groot dancing to ‘Mr Blue Sky’ by the ‘Electric Light Score’ while the rest of the guardians engage in a fight with space monster approximately as large as Scheps. It immediately sets the tone for the film and is a throwback to the opening shot of GOTG. On a related note, the soundtrack for this film is great with handpicked songs by Gunn from the 60s-70s. As soon as I heard George Harrison’s ‘My Sweet Lord’ I knew I’d be searching up the full soundtrack once I got back home.

The film is visually stunning with vibrant colors all around which excellently suites the film’s fun lighthearted tone. This can be credited to the new “RED Weapon 8K camera”, which Gunn himself claims that the “visual and practical effects gives us the ability to create a new aesthetic of film”.  Because of this, the film differentiates itself to most films from the MCU (marvel cinematic universe) that contain dull post-production colour grading. This is the first time Marvel Studios have used this camera, and rumor has it that this will be the standard camera for future movies within the MCU. Action sequences are of average quality with some standard vehicle chase scenes and some particularly unique sequences that greatly use visual comedy.

Speaking of comedy, the film’s dialog at times can be gut-wrenchingly hilarious, however sometimes the effect of the punchline detracts because of how unnatural the jokes are developed between conversations. At times it can feel a bit forced, making it look like the whole purpose of the conversation is to create humour for the audience rather than an actual real conversation between characters. Fortunately this is minimized due to how most of the characters within the film already possess odd characteristics that fully justifies the jokes used in a conversation. This is undoubtedly personified by the chemistry between characters that allows the dialog to seamlessly flow for us to digest.

I guess this leads to my main gripe with the film. While GOTG2 does shine in its comedic aspect, the film falls behind in its pacing. This can be seen in many scenes where the film transitions from a lighthearted tone to a serious one without actually building up any substance for us to care about the forced drama. It feels misplaced and awkward. As an eventual effect to that, developing relationships between characters feels heavily unjustified, and you’re left dazed and confused as to how the goals and intentions of a character changes so drastically within a couple of scenes. There are also questionable side-plots within the main plot that feel unnecessary. It’s almost as if the point of it is purely for the sake of filling in gaps between the main plot or setting up characters later used in other movies within the MCU. It also feels as if it was added as an extra challenge for the guardians as the main ‘villain’ proved to be underwhelming once again. This has been a reoccurring issue with most films within the MCU. Where the villain can be unthreatening, lacking in depth and meaning, or a combination of both. Either way it makes the plot feel pointless and cliched/cheesy.

Overall if you enjoyed GOTG for its likable characters, great chemistry, killer soundtrack, and good vibes. There’s a good chance that you’ll enjoy GOTG2 as much. However if you weren’t a big fan of the original, chances are that you’ll dislike this sequel even more than the first one. As it doesn’t hold a candle to the first one in terms of its plot structure and its pacing. Fortunately, Gunn already has plans for a third GOTG film, so let’s hope that this sequel was just a stepping stone to an epic comeback to close this gem of a trilogy.