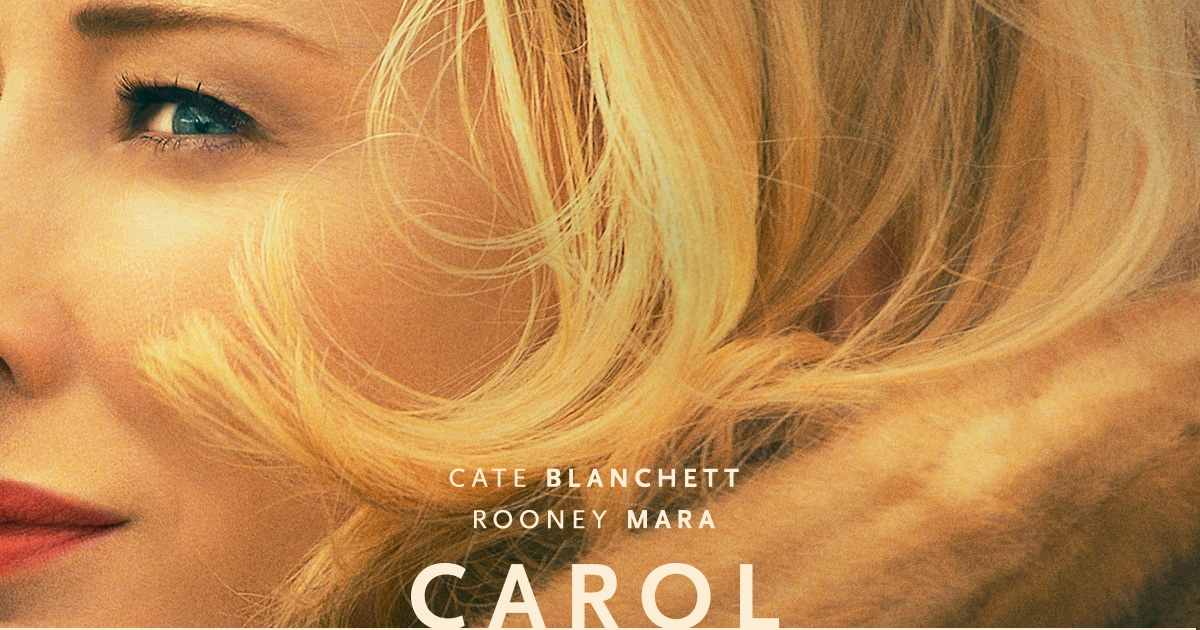 Warning: This film contains homosexuality and nudity. I suggest that you do not watch this if you’re uncomfortable with any of these themes. If these intrigue you, carry on and immerse yourself in this amazing movie!

Carol (2015) is based on a 1952 romance novel The Price of Salt by Patricia Highsmith. The novel is studied in the LGBTQ community as a piece that reflects the challenges faced by lesbians in the conformist 1950s America.

The female leads perform extremely well as lesbian lovers. Cate Blanchett’s acting is impeccable as the elegant, poised socialite deeply troubled by her impending divorce, Carol. Although Blanchett is known for her dramatic acting in films such as Cinderella and Blue Jasmine, her form of dramatic acting complements her character well. Carol is played as a character that makes punctuated statements through her elegance and opulence without flamboyance, as seen through every brush of her hair and every look in her eyes. Beyond that, Carol is seen as an impulsive and vulnerable yet mature character who takes the lead in her relationship with Therese. On the other hand, Rooney Mara is much subtler with her portrayal of the introspective and pensive aspiring photographer Therese who is swept in the turbulence of emotions she feels for Carol. Even when Therese is perturbed and hurt, she remains guarded and reserved, as opposed to the feistier and emotional Carol. Through the mastery of the two female leads, the slow, simmering chemistry between Therese and Carol during their flirtatious exchanges at the beginning of the film grows electric and palpable during their meetings with one another until it climaxes at their intimate getaway where they are in the throes of passion (if you know what I mean).

The cinematography of the film makes it an aesthetically pleasing piece to enjoy.  The romantic, dream-like scenes send the viewer into 1950s America in warm, soft hues, while the viewer is thrust into a dream of forbidden love that fights all odds to exist. The film is also one that pulls at the heartstrings, as many scenes are shot from the perspective of Therese. As I was watching it, I could feel my own heart aching as I was seeing Carol through Therese’s eyes while they lingered over Carol’s lips and eyes. I find that it takes skill to elicit such emotions of yearning and heartache without being overtly mushy, and this film manages to do so effortlessly.

This film centres on an important issue in today’s society as it is a point of historical reference of being ‘closeted’ LGBTQ individuals during the 1950s period of conformism in America. Despite the fact that the film centres around a lesbian romance, the skillfulness of director, Todd Haynes, precisely highlights the very closeted and covert nature of being lesbian in the 1950s. This is shown through the repulse of the other characters at the idea of ‘love between a girl and a girl’ and the subtle criminalization of lesbianism, as there is a clear knowing that such love was unacceptable during the 1950s America. I find this portrayal of the difficulties faced by the 1950s lesbian couple an interesting juxtaposition to our increasingly inclusive and accepting society, which is something that we ought to be proud of.

I guarantee that this isn’t the typical cliché romance movie that is filled with unbearable tropes; Carol (2015) is a movie that is highly enjoyable to watch for its aesthetic value and beautifully crafted story that is laden with the struggles and triumphs of love.

A Week in Theatre

Four Shows. One Week. Not an easy feat.     By Bridget Loughhead, Mahalia Stamford & Miguel Lontoc   This is a time of…